Lyla felt as though she had garnered resentment in her lungs since birth. It was only when she met the Doctor that she was able to enter recovery. Her suffering was not unique he told her. He knew her disease well. He'd spent years trying to help people just like her. Many successes and few failures. He'd try to lead her to a permanent relief with his theory.

Doctor: What is it?
My heart feels black like it could never turn to color.
My skin crawls when there's no response.
I lose my breath if 24 hours come full circle.
I wait in the dark and perpetuate this fate.
"A back walking away" is the running symbol in my life it's all I know and all I expect.
It grows and grows and worsens and worsens.
My relationships are suffocated, snuffed out.
It feels like I can't help what is happening to me no matter how hard I try to stop it.
The anxiousness and panic and manic and delirium, I best sum it up this way:
Everything hurts.

Doctor: What would relieve it?
Emotional sobriety doctor.

Doctor: For 90 days you'll sit in this room. You will sleep just behind that wall. You'll come out only to interact with the 10. From the paperwork you've completed, I've gathered 10 others with whom you'll be interacting over the three month period. You'll spend 7 days each with them, no more no less. You'll sit behind glass, like in prison. In a way, Lyla, you keep yourself imprisoned, this is why we do it this way, do you understand? The idea is to get you to break the glass on your own, give yourself the permission to become free. Every day, the person will come to visit you. Seven days will allow for an emotional connection. This process will lead you to the root of your cycle, what it takes to trigger your disease. It does not take much and you will see in time. At the end of the 7 days you'll experience withdrawal, it is then that you are most likely to see her, the child version of yourself. When she shows up do not be alarmed. Let her sit next to you, for two days. Can you make her feel safe?

Jade was recounting a nightmare.

It was black, then there was light. She stood behind floor to ceiling glass. A brown, tattered couch was propped up against it, where a stranger sat, his back to the couch, the couch to the glass. She stood directly behind him, behind the couch, behind the glass, staring down. She heard him crying, and watched as he reached to the table, not hesitating as he shoved a needle in his arm. She was screaming, but not a sound could be heard. It was as if she was on the other side, because she could hear his breathing, the creaking of the couch as he slightly rocked back and forth. But she couldn’t hear herself. There were no handles on the glass, no holes. There was no way to get inside. Her fists pounded hard as she screamed for what seemed like hours. They bruised, then bled. I can’t save him. And then she felt her heart stop, and as she fell to the ground, so did he. As she opened her eyes, she peered deep into the white distance, and saw a black dot. She walked for miles until she finally reached it, him. The black was ash, the man a stranger. She sat next to him, looking deep into his eyes, and placed her hand out, to wipe away the ash. He quickly seized her arm. Don’t. She then heard an old woman’s voice humming. You’ve been praying to false gods for years, Ijada. Jade couldn’t quite grasp what was happening to her. The woman kept repeating the same phrase, until Jade found herself atop a skyscraper. When the lightning finally made its way out of her eyes, she saw various women lined up, smiling. One by one they began to fall off the edges. No! She ran, placing her hand out to each of them. But it was too late. The old woman’s voice was stern. You must learn, Ijada.

She sat on the side of a dirt road, she was 7. She wore nothing but rags for clothes, with a cardboard sign that read, “please give me your attention.” She wasn’t asking for water, nor food, nor love, just attention. Her small mouth watered at the thought. Various men passed by her, all whom she thought were her father. Each one that took notice read her sign, smiled, picked her up, held her close, and carried her away. But each time, she was taken only to be brought back. They didn’t want her, and they made sure she knew it. She wept every time they put her down, and wearily picked up the sign, for it was always there where she left it.

One day a man walked toward her, in the richest of robes, robes that glittered under the hot sun. He took one look at her, and kept walking. It was her father.

Violet was the sort of person to pour coffee grounds in a cup, add milk, and drive to work. The careless sort.

We should do this again some time. I don’t want to lose you, he said. Violet paused, biting her lip. I can’t. Even then she couldn’t take her eyes off of him. She’d suffered from Stendhal syndrome since they met. Did you even listen to my voicemail? - From when?  - Fuck, she thought. - You know I don’t pay attention to voicemails. She was floored. He didn’t know. Should I explain? What the fuck should I say? she thought. That was over a fucking month ago. The entire day she maintained her composure. For fuck’s sake they had just gone to see one of the most emotional films of their time and all she could say when they walked out on the sidewalk was, It was good. Caesar, knowing she was the most emotional of them all, gave her a look that said, Why the fuck didn’t you cry? Violet made sure she saw the film a week prior, as to remain of stone for when that very moment occurred. And she stood there, like she was a fucking block of granite, like she wasn’t still in love with the man standing in front of her, like she hadn’t waited to see him after all these months, like she didn’t perfect the makeup and the hair just to reciprocate a smile, some joy radiating from him, caused by her. She wanted him to like her. She wanted him to feel something for her again. Suddenly she was puking in the bathroom stall at Laveau on New Year’s Eve, with drinks still burning through her system. But she picked up her phone and dialed Caesar’s number anyway, only to hear a beep after some words she couldn’t quite make out. And she uttered lines that were completely scripted, that she had written down weeks before, rehearsed in her room several times in the mirror, unsure of whether they’d ever come out in real life. I don’t think you know what it’s like to know someone like you. My heart is broken, but I haven’t been able to stop thinking of your face, and if we could of just.. I, I think I’m in love with you. The rest of the night was a blur.

I left you a voicemail on New Year’s Eve, she began. Saying what? - You should just listen to it, she stammered. But I’m here now, in front of you, just tell me. Violet felt the cold rush over her as they stood on the wide street, cars flying by. She wanted to throw herself in front of one. I had said I think I’m in love with you. He froze. Now she was sure he wanted to lose her. I have to go. She furiously drove away, looking back over and over, to see him walking down the street in the opposite direction, phone in hand, then phone by ear, listening. What now?

She wanted to be with him. More than anything in the world, all she wanted, was for him to see what he was doing to himself and most of all to them.

Nola looked up from her book and saw a vision. Up until that day, she had never seen anyone so beautiful. The way Shane moved, the way he spoke - the way his eyes never left hers. That was two and a half years ago, when she barely knew anything about him. She laid eyes on him, and her fate was sealed. She thought back to this time, when everything was so amazing and new. Before she realized that he was an addict. Before she felt unsafe. Before she couldn’t see herself living without him - but would she have to in order to take care of herself? Would everything come crashing down, would everything dissolve like the ashes that fell from her cigarette? Is that all they were, just beings passing by one another for a small moment in life, lessons to be learned, with no chance of thriving? For the first time she was unsure. He lied, and that wasn’t the first time. But she was so caught up in loving him, that she failed to love herself, and ignored the signs.

If he’s lying to me, if this fucking world has sucked him so deep that it’s making him lie to me, what the fuck are we doing? Nola was so swept away by her thoughts that she soon found her 9-year-old self sitting on the floor of her father’s apartment playing with a cinnamon-colored bear. Her father slowly crept in the room. Your report card was shit this period.. get in my room. His drunken slurs echoed in her mind. She remembered everything from her childhood as though she was still living it. The hollow promises, the broken commitments. Her father lived a double life, like he was a part of the circus. He was two people to her - the unselfish, charismatic, beautiful father and the manipulative, abusive, incestuous alcoholic. As she got older the lines blurred and she could no longer tell who he really was. She started to lose herself, not knowing who she could trust - what she should feel - how she should act - unsafe. This was exactly how Shane was making her feel. Shane was her father, and she could not escape that. 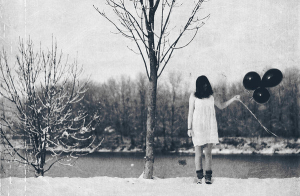 Haute Harlot is a gothic lifestyle blog created by Jennifer Diane. You can find her on Instagram.

a side project: film vixen Jennifer Diane was raised in a cursed town in New Jersey. Sometime during her adolescence, she became obsessed with dark glamour and macabre. As a result, everything she touched turned to black, and she became a strange young woman fixated on inspiring others through this dark lens. After birthing Haute Harlot, she knew she would pursue the brand even if no one ever saw it, even if she’d never be compensated for it, and even if no one ever wanted it.